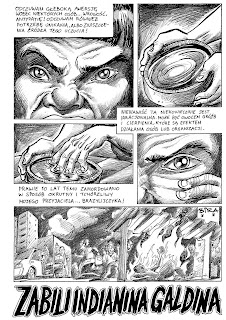 Dominik Szczesniak:
"Wow, thanks for the quick response. You really write a lot!
I'm in a middle of translation - hopefully I'll finish today, so the interview and your short stories will appear on our www tomorrow. If you could send some photo of you (it can be a caricature - most of the people interviewed in Ziniol sent me their caricatures or pictures made in photoshop) and some illustrations (maybe from Don Quixchote?).
In addition you'll find polish version of your comic."

1.Your're a cartoonist and a comics illustrator - how much is the difference between those two?
In Brazil we see the cartoonist as the graphic artist who creates generic cartoons, as those that we see in International Contests, with a focus in world themes as environment, earth’s warming, islands, pirates, etc. The Comics illustrator is specifically the graphic artist that works with Comics. But, as we can see, the cartoon gets so close to the comics, when we draw the action happening step-by-step. Some cartoons have 6 frames in one only page and it gets the Comics format, with no dialogs, as usual in cartoon language. In fact, I appreciate the north-american designation “cartoon” for any kind of drawing (editorial, animated, comics…). We also use the word “charge” (editorial cartoon) and “caricature” (when our interest is only in the face).

2. What is the situation of comic books in Brazil?
Well, the Brazilian Comics market has changed a lot. We used to buy Comics in the Newspapers’ stands in the streets. Nowadays this is the last place to find Comics magazines, when you look for them. Of course you’ll find Marvel, DC, Disney and MSP (the only Brazilian) comics there. As the publishers have preferred the book or graphic novel format, the best place to find them is the Bookstore. But also we have had a fantastic boom in the comics production (alternative line) with fanzines, independent or small publishers, since 2006. The fanzine was an important cultural happening in Brazil in the 70’s, but they appeared again.
Another fantastic Brazilian Comics wave is the Quarto Mundo:
http://www.4mundo.com
Formed by a group of active comic artists, the Fourth World aims to help distribute, sell, and exchange experiences in production of independent magazines to find ways to circumvent the problems of this production in our country.
The Fourth World is an alliance of people who publish comics with seriousness and quality from north to south of Brazil. 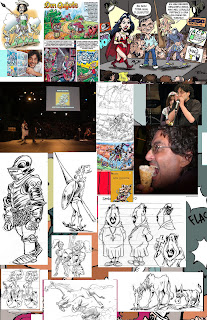 ANGELO AGOSTINI
Although born in Italy, Angelo Agostini can be considered the first Brazilian comics artist. After making illustrations and caricatures for magazines like Diabo Coxo, Cabriao and Revista Arlequim, Agostini produced a continuing story in images for Vida Fuminense in 1869. The comic was called 'As Aventuras de Nho Quim’ or ‘Impressoes de Uma Viagem a Corte' with nine episodes, two pages each. In Revista Illustrada he’ve published 'As Aventura de Ze Caipora' in 1883. Although this comic was often interrupted, the series counts 35 episodes. In the early twentieth century appeared the O Tico-Tico magazine, for which Agostini illustrated the title. Since 1982 he has nominated the more important prize of the brazilian Comics.
Tico-tico was the first Cartoon and Comics'' Magazine in Brasil, published in 1905 (with the art of Angelo Agostini, Max Yantok, J.Carlos and Luiz Sa). It was a very popular magazine.

J. CARLOS
Is considered Brazil's best comics artist from the early twentieth century. He began his professional career in magazine O Tagarela on 23 August, 1902. Soon, he was active for almost every illustrated magazine of the time, like A Avenida, O Malho, and Para Todos. With his limpid style, he deviated from the traditional drawing styles. It was the magazine of Careta, for which Carlos worked until his death in 1950.
During his career, he created such typical Rio de Janeiro characters as ''Almofadinha and ''Melindrosa''. He portrayed the carnival, beaches, fashion and all the Brazilian customs of the time. For the juvenile magazines he created the characters of Juquinha and the little girl Lamparina. During World War II he developed a parrot with typical Brazilian manners, that inspired Walt Disney to create ''Ze Carioca''. It didn''t come to a further collaboration with Disney, but Ze Carioca remains in Disney''s line of characters until the present day.

JAYME CORTEZ
(1926 - 1987)
Portuguese comic artist Jayme Cortez began his career in the magazine O Mosquito as an apprentice of Eduardo Teixeira Coelho. For this magazine, he created various comics, like the series ''Os 2 Amigos''. In 1947, he emigrated to Brazil, where he created the comics ''Caca aos Tubaroes'' and ''O Guarany'' for the journal Diario da Noite. In 1948, he worked with Messias de Melo for Gazeta Juvenil and Gazeta Esportiva. Later, he began working for the McCann Ericson advertising company. Jayme Cortez has won several prizes for his illustrations, and his work has been exhibited in Brazil''s most important museum, the Masp in Sao Paulo.

JULIO SHIMAMOTO
He was an icon of the fifties'' brazilian Comics. He joined a team with Jayme Cortez (a portuguese illustrator, that learned to draw with the great Eduardo Teixeira Coelho), Sergio Lima, Nico Rosso, Eugenio Colonnese and Rodolfo Zalla. They drew many Terror, Comics and War stories.

SERGIO LIMA
He has drawn comics for the Disney publications of the publishing house Abril. From the early 1970s to the late 1980s, he has drawn stories with most of the characters (Duck, Mad Madam Mim, Jose Carioca).

EDUARDO VETILLO
Eduardo Vetillo drew Disney comics for the publisher Abril in the early 1990s. He has mainly done stories with 'Hard Haid Moe', but also with 'Mickey Mouse' and 'Ze Carioca'. He also drew Spectreman, Hanna Barbera and Os Trapalhoes for Ely Barbosa Studio, in Sao Paulo. I was his assistent in the years of 1979 and 1980.

LOS TRES AMIGOS
Here in Brasil, in the eighties, three cartoonists and comics creators joined to publish a magazine. They were Laerte Piratas do Tiete), Angeli (Chiclete com Banana) and Glauco (Geraldao). Some years after Adao joined them too. They have published some of more crazy and Non-sense Comics in Brasil. Glauco was tragically murdered recently.

MAURICIO DE SOUZA
His Studio sells comics and animations for many countries as Italy, South Korea, China, France, Spain and many others. He publishes Strip Comics since the 50’s. In his best times, had 300 employees.

4. I've talked to Jose Carlos Fernandes from Portugal about differences in Brazilian and Portuguese comics. What do you think about this theme? Do you see any of them?
Of course the culture in South America is very different from the European. The Portuguese Comics have a peculiar humor sense. Is fact, also, that Brazil had more influence from USA comics than European. But we have a lot of authoraI comics that approach our production to European (names as Jose Aguiar, Laudo, Vilacha, Josmar, Seabra, Daniel Esteves, Edgar Vasques, Rodrigo Rosa can prove it). I can distinguish the Portuguese Comics (or BD, as they call it) in two phases: the classic (with Eduardo Teixeira Coelho, Jayme Cortez, Jose Ruy) and the new (Sonia Oliveira, Jose Carlos Fernandes, Luís Henriques, Filipe Faria, Manuel Morgado, Esgar Acelerado, Rui Ricardo). In Brazil, we also have this. So if I compare the portuguese and Brazilian new stuff I see more coincidences than differences.

5. What is your best achievement in comics, according to you?
My Don Quixote Comics had been nominated with the HQ MIX best Comics Adaptation Prize (2009). I spent one year with it, and was fantastic draw and paint those 88 pages. I love Cervantes narrative style.

6. Why did you choose comics? What's so fantastic about them?
My mother told me that when I was a baby, the first time I went to be vaccinated, the nurse asked her to hold me strong. But it wasn’t necessary I was hypnotized by the full colored characters in the walls. This is the thing. Comics have characters and they can do anything, talk, run, fly, swim, go to others planets, participate, dream… When I read Comics feel like going to places I’ve never dreamed about. When I create them I feel the same.